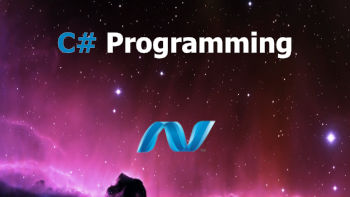 The C# Programming with Visual Studio course provides developers with the skills and knowledge they'll need to succeed by providing an in-depth and hands-on analysis of different parts of the C# language. Techniques for maximizing productivity using Visual Studio are also covered such as code snippets, debugging techniques, visual database queries, and more.

The course begins by providing a look at the different components of the .NET Framework and .NET Core and discusses the basic building blocks of the C# language including variables, conditionals and looping. Next, Object-oriented features found in C# are discussed so that students understand how to leverage concepts such as inheritance, method overriding, interfaces, and object hierarchies. The course also shows several of the exciting language features available in C# including lambda expressions and LINQ to Objects. Other topics covered include and introductory look at data access technologies.

This course is taught by Dan Wahlin (a member of the Microsoft MVP and Regional Directors groups).

This course is designed for software developers with previous programming experience using a programming language such as Visual Basic, C++, Java or other languages.

This course is valuable for developers who are interested in building applications using the C# programming language.


Class pricing is based on the number of class days and number of students in class. We normally allow up to 24 students per class.

If you'd like more information on pricing or want to schedule a class for your development team please contact us and we'll be happy to provide addition details.


We don't offer public classes or one-on-one classes for individuals. For public classes we partner with Interface Technical Training and they offer instructor-led classes in Phoenix, AZ or online through their RemoteLive technology.

Contact Us about licensing our courseware (slides, course manual, lab manual and code) for your own training courses.